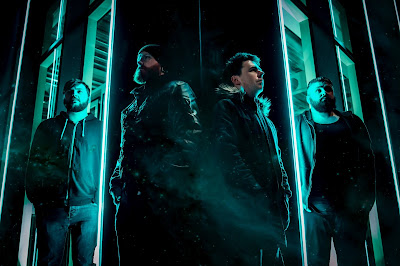 We had a quick chat with Steven (guitarist from Dialects) about their upcoming performance at Canadian Music Week as well as whats in the future for the band!

Hammer Records: Tell us what you think of when you think Canadian Music?
Dialects: For me - Rush, Godspeed, You Black Emperor and Alexisonfire are 3 bands that instantly spring to mind. Canadian music is so diverse though - from Indie artists like Arcade Fire & Broken Social Scene through to commerical titans Bryan Adams and Drake. Oh yeah...and Nickleback.

Hammer Records: How did you get involved in Canadian Music Week?
Dialects: We got an email, out of the blue, from one of the organisers, asking us if we'd be interested in playing. At first, we thought we'd been sent it in error! We're a pretty small band, so being invited to a festival as prestigous as CMW is totally mind-blowing!!

Hammer Records: What do you have planned for Canadian Music Week?
Dialects: We do have something in the pipeline, we can't reveal it just yet though! Because we're coming from so far away, we're only able to bring minimal equipment - which for Conor (Anderson, Guitar) and myself is a pretty major challenge. We're both massive pedalheads, so stripping down to the bare essentials is going to be interesting!
We've recently become endorsees of Reverend Guitars (www.reverendguitars.com) so they'll most definitely be making the trip across with us!!
Hammer Records: What message do you want to send to Canadians listening to your music?
Dialects: We would like to say a massive "thank you" to everyone at CMW for giving us this opportunity and cordially invite all Canadians to head to Toronto from May 2nd to 8th and come to all our showcases!!

Hammer Records: What do you have coming up?
Dialects: 2016 is shaping up to be a really good year for us - we're currently at Chem19 Studios, recording our debut album! We've been writing material for this since 2014, it's also our first recording with Liam (McAteer) on drums, and getting to work in the same studio that bands like Mogwai, Admiral Fallow and The Twilight Sad have made albums in is incredible.

We're heading out on a short UK tour later in March, then it's Canada in May.
We've also just announced that we'll be playing at ArcTanGent in August! We've been dying to play this festival since the band started, so getting the chance to this year is amazing!!
People can find our music online at - https://dialectsuk.bandcamp.com/
and keep up with our activities via any/all of the following...
www.facebook.com/dialectsuk
www.twitter.com/dialects_uk
www.instagram.com/dialects_uk
Posted by Unknown at 10:00 AM