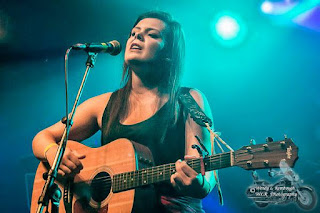 Ivy James is bringing her singer-songwriter music to Toronto's Canadian Music Week. We spoke briefly about her upcoming performance.

Hammer Records: Tell us what you think of when you think Canadian Music?
Ivy James: When I think about Canadian music, the first word that comes to mind is “supportive.” Canada is a great country to be a musician in and we have so much talent. Not only does our government support us with grant programs like FACTOR, but we also have great festivals like Canadian Music Week that bring all of us together and it really shows how supportive we are of one another.

Hammer Records: How did you get involved in Canadian Music Week?
Ivy James: This is my fourth year playing CMW. When I was 16 years old, I went to a workshop at Metalworks and they played a video encouraging musicians to apply through Sonicbids. This was just after I had released my first EP and I ended up being selected. CMW was actually one of my first shows. Four years later, I'm lucky enough to still be a part of such a great festival.

Hammer Records: What do you have planned for Canadian Music Week?
Ivy James: I've got a few tricks up my sleeve. This will be my first year performing with a full band instead of as a solo acoustic artist, so that's exciting! It's also going to be one of the first shows in support of my new EP, which is scheduled for release in early May.

Hammer Records: What message do you want to send to Canadians listening to your music?
Ivy James: I try very hard to write all of my music from a genuine and honest place. If anything, I hope that people who listen to my music understand that I went through a rough time and they can relate to that in their own lives. It's okay not to be okay, as long as you know that one day you will be.

Ivy James: I have a new EP coming out! The date is still being finalized but it's looking like early May. I'm also playing some shows this summer that I can't announce yet, so stay tuned for that. You can find me on Facebook (Facebook.com/ivyjamesmusic), Twitter (Twitter.com/ivyjames), Instagram (Instagram.com/ivyjames) and YouTube (YouTube.com/ivyjamesmusic).  My music is available through iTunes, Bandcamp and other online channels.