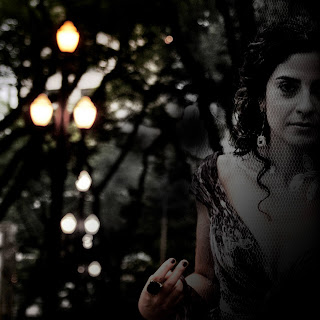 Hailing from Sao Paulo, Lu Horta will be gracing our stages at Canadian Music Week with her world/alternative music. We had a short conversation about her upcoming performance.

Hammer Records: Tell us what you think of when you think Canadian Music?
Lu Horta I think Canadian Music has great similarities with Brazilian music. Both of them are open to the world’s musical influences. Canadian musicians like Joni Mitchell, Leonard Cohen, Rush, Neil Young, Alanis Morissette are big references for me, having influenced my work.

Hammer Records: How did you get involved in Canadian Music Week?
Lu Horta: I was selected through the Sonicbids website.

Hammer Records: What do you have planned for Canadian Music Week?
Lu Horta: I’m preparing a set list with songs from my first and second albums, and specially songs from my new project “A Noiva da Cidade”. I am also presenting my latest fusion of original arrangements using body percussion language and playing them alive for the first time. I will  perform Alanis Morrissette's song “Hand in my pocket” in a Brazilian afoxe version with body percussion.

Hammer Records: What message do you want to send to Canadians listening to your music?
Lu Horta: Above all I hope to bring joy through my music !

I sing most of my repertoire in Brazilian Portuguese but I’ll  include one song in French and some songs in English. Brazilian Portuguese is a very musical language and its sonority speaks to the heart. It’s important to clarify that some of my video clips have english caption, but I hope that even when not understanding its lyrics, people will still get its message and feeling when they hear my music.

Hammer Records: Whats coming up for you?
Lu Horta: So many new things are coming up and I’m glad to share them with you: in May 2016, right after CMW, I’ll be in Europe presenting this show; the release of my new album “A Noiva da Cidade” will happen in October 2016; in November of 2016 takes place the première of the Show  "Lado A" (Cie UBI) for which I did the composition of the sound track in partnership with Marcelo Effori.

I’m also a member and co-founder of the Brazilian Body Percussion Group "Barbatuques" and I am involved in all its projects; more details you can get at my website www.luhorta.com