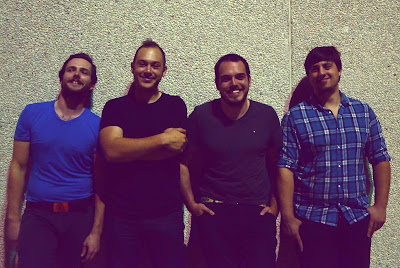 Toronto natives Dan Daly have the hometown advantage for their upcoming performance at Canadian Music Week. We had a nice quick chat about the upcoming show.

Hammer Records: Tell us what you think of when you think Canadian Music?
Dan Daly: To me at least, Canadian Music has always been reflective of the landscape. It's almost as if you can hear the mountains, life on the coast, freezing winters, sidewalk community markets - it's illustrated through the music. It gives the music a personality beyond the music itself. Even more than the landscape, the music reflects this sense of community that Canadian Music exudes. Bands like Broken Social Scene and Sloan, artists that have grown with the cities and have taken so much from Canada, are indicative of the power our country has on what we create.

Hammer Records: How did you get involved in Canadian Music Week?
Dan Daly: We played twice during last year's Canadian Music Week, and it was incredible. Not only being able to play for new people and our fans, but to go out every day of the week and watch other artists putting their hearts and souls on display in the name of the music they create. There are few experiences like it.

Hammer Records: What do you have planned for Canadian Music Week?
Dan Daly: This year's CMW will be especially big for us, because it will be the first live show we will play this year. I (Josh) have been living in St. John's, NL, for nearly two years. Shows like CMW and festivals mean that I come home to see my friends, practice r the music we have created, and perform for people that want to hear us. Because we haven't played many live shows the last couple years, it is always exciting to have a live gig opportunity, so we tend to get pretty wild. Feeling drained after a night of performing is the crown jewel of the festival for us.

Hammer Records: What message do you want to send to Canadians listening to your music?
Dan Daly: To anyone that has taken the time to listen to what we have to offer, thank you. There are so many amazingly talented bands and artists across our country that rely on listeners like you to go out, listen to live music and support your city (and on a grander scale, Canadian music as a whole).

Hammer Records:  What do you have coming up?
Dan Daly: With Josh coming back, we have lots of exciting plans for this year. We're currently writing for our third studio album and are hoping to plan our first big tour since forming. Listeners can check out our website, www.dandalyband.com for music, videos, news and much more. We're also on BandCamp, Soundcloud, and iTunes, and all of those links can be found on our website.