Both Of Them Milenko - Ensh 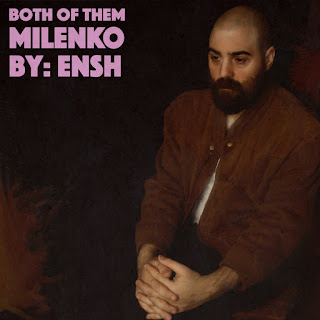 Ensh released his album "Both Of Them Milenko" a bit of a weird title, but maybe its because the contents of the album are a bit weird as well. Having an album in both English and Serbian is a cool concept and something to be proud of. The album itself sounds well mixed and the beats are both interesting and stimulating. The vocals sound more grinding and out of character than what I'm used to. Neither fitting into a hiphop genre or a Pop/Dance genre. Maybe theirs a niche market that I'm just not used to hearing. At times I feel like I'm being subdued under a trance, while other times I feel like I'm in a boot camp being yelled at by an angry drill sergeant with a love for dance music. The vocals are not off pitch or anything, but sometimes just quite abrasive to the ear. There also is a bit of a loose song structure to the tracks but since most of the time the beat doesn't change substantially, you might just loose track of where you are in the song. Hints of Nine Inch Nails pop into my head as I listen to some of the later tracks. So maybe its why I find some of the tracks more jarring than maybe some other listeners.

The second half of the album seems more relaxation and meditative than the first. Maybe it's because without understanding the language my mind can focus more of the melody and timbre of the track. Also the vocals are softer and more melodic than the first half.

A very interesting listen and I give it all the best to try and break into the western market. I hope that it finds it's niche listeners who will enjoy and share this music.

Check out Ensh on Facebook HERE.
Posted by Hammer Records at 5:49 PM