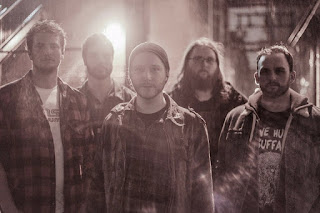 Batten down the hatches! Nine O'Clock Gun is preparing on dropping a new album entitled "Storms". Hammer Records was luckily enough to get a pre-release of a couple tracks off the upcoming album. The bluesy Vancouver rockers have themselves a solid yet diverse album if any indication of the three tracks reflect the rest of the album.

One of the tracks if a beautiful folky, almost bluegrass rock track that suits their sound so well. I wish the mix of this track was done a bit more Top 40 style, rather than a straight rock style mix. This has an Imagine Dragons feel at some points mixed with Mumford and Sons. It is a great sounding track, don't me wrong. This track is going to have you off your feet dancing up a storm (no pun intended) at any of their shows. I could just see this being a breakthrough radio single for them if remixed slightly.

The second track I got to listen to reminds of 60's/70's blues rock. Classic rock riffs with some excellent catchy vocal hooks on top. The bands tightness is right on point with this track but also giving the whole track a sweet groove that gets your body moving right off the bat. Once again, Im excited to hear this one live and see them put on a killer show with it. The structure is fantastic. The bridge reminds me of an early Muse. I can already see hands up in the air clapping along with this awesome track.

The last track on this sample platter of delicious tracks is a straight up blues lovers dream. You have a great mix of straight up blues guitar, drums, and bass mixed with a southern rock style vocal that gives it an edgier mix than if you were to have a straight up blues singer sing this track. The chorus is full rock anthem with a tight riff and huge chords. This track could be a huge hit on the festival track, playing to the larger crowds but getting a nice and intimate feel as well. I really wish they had some kind of backing vocals too. I hear some low harmonies but I would love some huge gang "Hey! Hey! Hey!" but maybe they're just holding that for the live shows. I think it would help fill out the track and get your blood pumping. The guitar work is brilliant, catchy but not too show boat. The bass and drums hold down the whole groove through out the entire song. They have a video that will be released with this track and you will want to check out with it as well. I believe it was filmed at the Red Room but lets just say, you might not recognize it.

Check out their Facebook page HERE.
Posted by Unknown at 4:29 AM