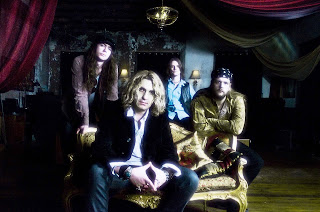 Alternative rockers Radio Free Universe will be bringing their music to Canadian Music Week. We had a short chat about their upcoming show in Toronto.


Hammer Records: Tell us what you think of when you think Canadian Music?
Radio Free Universe: It's a great outlet for bands to find industry contacts, fans and then some.  You can really figure out what you need to get your music out there.

Hammer Records: How did you get involved in Canadian Music Week?
Radio Free Universe: We applied 2 years ago and got in.  This we took allot of what we learned and applied it.  The band is starting to really do well as a result

Hammer Records: What do you have planned for Canadian Music Week?
Radio Free Universe: We have been working on perfecting our songwriting and performance over the last 2 years.  We've made an amazing record that can now be bought on prerelease at the festival and will be going to radio in the next month.  We know love what we do even more than when we started and I think it's really starting to show live.

Hammer Records: What message do you want to send to Canadians listening to your music?
Radio Free Universe: Play it loud and enjoy. Each song has become its own soul and has something important and entertaining to share with the listener.


Radio Free Universe: Yes our EP, Casa Del Diablo produced by Grammy winning producer Glen Robinson is on the block to go to radio.  Our first single American Gun is an amazing rock anthem that exemplifies anissue which seems to be dividing a nation. Something happens when we play it live the audience totally gets it. We our currently touring a pre release tour called "the Pre mature Evacuation tour". We will be following up with a full tour once he album tracks to radio.  So far we have had amazing feedback from fans and industry alike.
We're in Ottowa and montreal this weekend norther Ontario the next week.  We will be ending our tour right at the Cadalac lounge for CMW on  May 3 at midnight.
Www.facebook.com/radiofreeuniverse
Www.radiofreeuniverse.ca
Www.twitter.com/rfuniverse
Www.soundcloud.com/radiofreeuniverse
Posted by Unknown at 3:05 PM