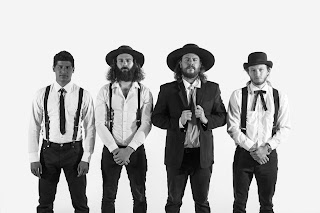 Bluegrass folk rockers The Dead South are making their way to Toronto. We had a nice talk these Regina folk about their upcoming performance at Canadian Music Week.


Hammer Records: Tell us what you think of when you think Canadian Music?
The Dead South: Since we've begun travelling abroad, we've noticed that Canadian music has a great reputation overseas, and it's easy to see why. We're constantly struck by the quality of music coming out of our hometown of Regina, SK, not to mention the rest of the country. The music world is such a great, small, tight-knit community in Canada and it's an honor to be a part of it.

Hammer Records: How did you get involved in Canadian Music Week?
The Dead South: We first played Canadian Music Week in 2013, this will be our third year attending. In our first year, when we were still very young as a band, SaskMusic invited us to perform at their official showcase which introduced us to Joerg Tresp of DevilDuck Records based out of Hamburg, DE. He was kind (or foolish) enough to sign us to his label shortly thereafter. Our second kick at the CMW cat saw us secure a spot with Paquin Artist's Agency, which now takes care of our booking. This time around we're hoping for a private jet.

Hammer Records: What do you have planned for Canadian Music Week?
The Dead South: We have something pretty neat in the works for this year, but we can't discuss it just yet. Mainly so we don't look like fools if it doesn't happen.

Hammer Records: What message do you want to send to Canadians listening to your music?
The Dead South: Message shmessage! Our show is all about having a good time and escaping reality for a bit. We're not trying to teach or preach.


The Dead South: After CMW we head straight to Europe for a two-week tour to promote our second album, which will be (tentatively) released in August in Europe and October in North America. We're in the middle of planning a nice, long fall tour to accompany the album release as well. More info can be found at www.thedeadsouth.com; all links to social media, etc. can be found on the website.
Posted by Unknown at 7:30 AM