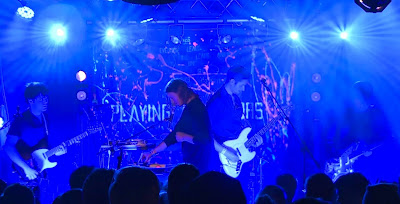 Columbus band Playing To Vapors is coming to Canadian Music Week. We had a nice chat with the band about their upcoming performance in Toronto.


Hammer Records: Tell us what you think of when you think Canadian Music?
Playing To Vapors: We think of the many amazing Canadian artists that we love and have influenced us! Neil Young, Rufus Wainwright, Death From Above 1979, deadmau5, Arcade Fire, the list goes on.

Hammer Records: How did you get involved in Canadian Music Week?
Playing To Vapors: We applied through Sonicbids, and we are very humbled to be selected considering how many submissions there must have been.

Hammer Records: What do you have planned for Canadian Music Week?
Playing To Vapors: We're very excited for our showcase at The Hideout on Tuesday night. We'll be playing tunes from a new album we're in the process of recording right now. It's material we're extremely proud of, and we're excited to debut it. It's our first time playing in Canada, our first time playing internationally in fact! You bet your butt we're going to make it special.

Hammer Records: What message do you want to send to Canadians listening to your music?
Playing To Vapors: We'd like to say thank you and keep listening! There's nothing cooler than the feeling you get when you realize that music you create resonates with someone else. Especially when those people live in a different country. We're happy we reached your ears and we can't wait to see your faces at CMW.


Playing To Vapors: Our debut album, which was funded through our fans via Kickstarter, will be released early Fall.  We intend to tour for it’s release.  Our upcoming shows are in Ohio over the Summer, but hopefully Toronto will like us and we’ll be back soon!
www.playingtovapors.com
www.facebook.com/playingtovapors
Twitter: @playingtovapors
Instagram: @playingtovapors
www.youtube.com/user/playingtovapors
Posted by Unknown at 8:04 PM