Nahko and Medicine for The People - NEW ALBUM AND SINGLE! 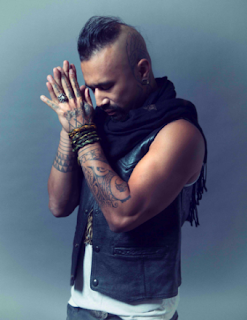 American sensations Nahko and Medicine for The People have just revealed the video for their brand new single ‘San Quentin’, which is taken from the forthcoming album HOKA which will be released on June 10th through SideOneDummy Records and is currently available for pre-order at nahko.com.

After the roaring success of their sold-out debut visit to the UK last year and a further sold-out tour this January, Nahko and Medicine for The People will be back for a full Euro tour this August.

Recorded with Grammy Award-winning producer Ted Hutt (The Gaslight Anthem, Old Crow Medicine Show, Lucero, Dropkick Murphys), HOKA is a very personal record with Nahko’s traditional spiritual positivity evolving into a much deeper examination of his roots and the tragic circumstances that surround his birth.

He was adopted as a baby by a middle class, white American family in the north-west of the country and grew up playing piano at a young age - which is where he learned to respect music.

However, disillusioned by the world around him and inspired by vagabond, Americana musicians and storytellers like Conor Oberst and Bob Dylan, Nahko left home as a teenager in search of adventure and self-discovery. Armed with stories, a guitar, and a fierce set of ideals, he set out to bridge the cultural gaps dividing his own psyche.

It was then he found his mother on the Internet, met her, and began to learn the truth about this backstory and his true ethnicity of Puerto Rican, Native American (Apache) and Filipino descent. His self-branded ‘real talk music’ is the result of the personal journey of healing and acceptance that followed.

Because his mother was forced into human trafficking, Nahko and his mother are advocates for the anti-trafficking movement of indigenous men and women. A few years later, Nahko learned that his biological father had been murdered in 1994.  The new single ‘San Quentin’ is the result of Nahko visiting the man responsible for murdering his father - and forgiving him.

“I didn’t really know what I was going to say to him,” Nahko explains, but as he sings, he’s “come a long way to tell you this story - there’s no turning back now.” Nahko ventured on the visit so he could get some closure after spending the majority of his life unravelling the truth of his childhood. It was important to him to forgive the man that murdered his father in person. Both the video and song are more uplifting than one would expect given the subject matter, but that is just a reflection on Nahko’s outlook on life.

"I went there to forgive this man and in forgiving him, I freed myself. It only hurts yourself to hang onto hate. Forgiveness empowers you to create change. I believe everything happens for a reason ­ good and bad. People are put in your life for a reason, and you need to turn that pain into something positive to make the world a better place."

"Over the last three years, I've been cracked open so deeply in my own healing to really give this record my all," explains Nahko. "My style of writing and my intentions with how I put things together has evolved a lot. I'm able to better paint the picture after time on the road, seeing first­hand the emotional state of the people of the world, of how sick people are, and how much healing they need."

Another single-to-be is the blissful acoustic epic ‘Tus Pies (Your Feet)’, which was inspired in part by Chilean poet and politician Pablo Neruda. "It's about friendship and being an anchor for someone. ‘Pies’ is the Spanish word for 'feet.' At the end of one of his poems, Neruda says a line I cherish: 'I love your feet for how they walked on the mountains and through the rivers and through the valleys until they found me.' I've always loved that picture of how we find people in life and all of the intricate twists and turns that it takes for someone to arrive."

And as for the album title? "Hoka is a Lakota word, it is a call to action. It's what Crazy Horse would say when he went into battle, 'Hoka, hey!' My call is to put action to the words that I speak and the lyrics I sing. Not just to talk, but to do,"

Nahko describes his music as a mix of hip‐hop and folk rock with a world message to spread awareness of living in harmony with each other and Mother Nature. Lyrically they explore themes such as indigenous ideology and mythology, social commentary on economics and the distribution of wealth and power, youth empowerment and direct action.  You find out more in the ‘Getting To Know Nahko’ video where he gives an insight on the origin of his name and unique views on music.

The word-of-mouth sensations first came to prominence with their song ‘Aloha Ke Akua’ which has gained over 4.7million views to date on the fan made video and became a Top Ten hit on both the Billboard Top Alternative Albums and Top Heatseekers charts.

The band continues to gain members of their global tribe of like­minded fans as they spread their musical message having toured with acts as Michael Franti, Xavier Rudd, SOJA, and Trevor Hall.
Posted by Unknown at 10:59 AM