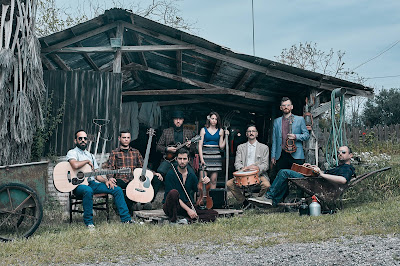 OSOG will be bringing their rock and roots music to Canadian Music Week this year! Straight from Israel, OSOG is excited to perform in Canada for the first time! We had a quick chat with them about their upcoming performance.


Hammer Records: Tell us what you think of when you think Canadian Music?
OSOG: Die hard fan, from Neil Young to The Weekend, Brian Adams to Celine Dion!

Hammer Records: How did you get involved in Canadian Music Week?
OSOG: Playing this festival was one of the goals we set for ourselves, we submitted our entry once we knew we had a good enough record and held our fingers crossed. Later the kind people at CMW let us know we got selected to play this year's festival.

Hammer Records: What do you have planned for Canadian Music Week?
OSOG: We're a special bunch in that we play only acoustic instruments and that we don't really have any "arrangements" for the songs - This is in part jam music and every show is unplanned and really only happens once. We'll be spending a few days in Toronto around our showcase date and the festival goers can expect to find out busting out in the occasional jam anywhere in town.

Hammer Records: What message do you want to send to Canadians listening to your music?
OSOG: OSOG can't wait to come to Canada for the first time! I've been making a lot of contacts in Canada over the past months in preparation for the festival and I must say I reckon you are an exceptionally nice people - I'm sure we'll have the best of times with you, come support us in our showcase!


OSOG: We just released a single and music video for "Who Who", the first song off our upcoming record. We're gonna be releasing our 2016 self-titled record on limited-edition vinyl.
We're gonna do some touring in Ontario around the festival time.
You can find all our music, this new video, Canadian tour dates and more in our official website osogfamily.com .
Some links:
http://osogfamily.comhttp://facebook.com/osogbandhttp://instagram.com/osogbandhttp://soundcloud.com/osoghttp://twitter.com/osogband
Posted by Unknown at 7:56 PM