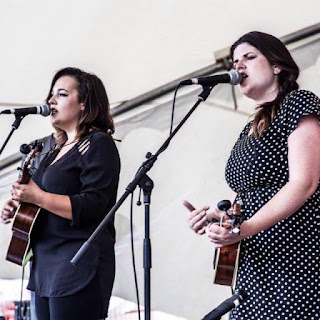 Folk music straight out of Fort Saint John, Twin Peaks are gearing up to perform at Canadian Music Week. We had a short chat with them about their upcoming performance in Toronto.

Hammer Records: Tell us what you think of when you think Canadian Music?
Twin Peaks: Canadian music to us means community! After four years of music making and touring we are shocked time and time again by the support of our fellow musicians, venues and fans. The people in the Canadian indie music scene have been so generous with us, we wouldn't be where we are without all of the information sharing we have received from our peers.

Hammer Records: How did you get involved in Canadian Music Week?
Twin Peaks: We've applied to showcase at CMW a couple of times before and are super excited to get a spot this year! Following our Western Canadian Music Award win last fall the opportunities are really starting to roll in, this is a really exciting and busy time for us.

Hammer Records: What do you have planned for Canadian Music Week?
Twin Peaks: Our live shows are infused with our between song banter and chemistry, so really every show is special and different. We are both strongly opposed to rehearsing any banter which usually leads to some pretty hilarious improvised (or at least we think so) moments.

Hammer Records: What message do you want to send to Canadians listening to your music?
Twin Peaks: As a couple of girls from a somewhat isolated, northern part of Canada we like to think that we're levelling the playing field. Whether you are a fan, a musician or a person in the industry, from a big city or the middle of nowhere... Music and opportunities for musicians should be accessible to everyone. We play music because we want to share that experience with our fellow Canadians not because we need to win awards or be recognized in a line at Tim Hortons (although that would be our personal definition of "making it").


Twin Peaks: Our upcoming tour begins in Toronto with our CMW showcase May 3rd at the Dakota Tavern! Then two weeks of Ontario dates followed by a summer full of Western Canadian dates and eight great Canaidan festivals including Winnipeg Folk Fest, Wild Mountain Music Fest & Regina Folk Fest.
Find all of our tour details on our Website: http://twinpeaksmusic.ca/twin-peaks-tour
Facebook: https://www.facebook.com/Music.TwinPeaks/
YouTube: https://www.youtube.com/watch?v=jo4UXv_bmvQ
Posted by Unknown at 7:45 AM