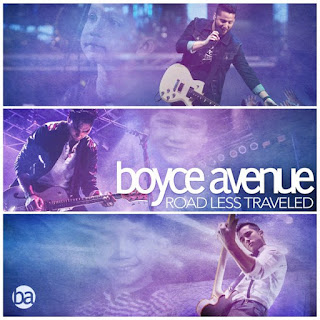 When I think of Boyce Avenue I always think of their Youtube channel with some of the great covers. I also think of their awesome collaborations with many artists. Their videos were always so beautiful. I could only imagine the music that they were creating themselves. This is the first full album on their own label. These songs sound like they are very near and dear to the bands hearts. If their EP was full of their ideas then this album is full of their imagination.

The album is full of feel good, sunny summer day, sit on the grass tracks. Tunes that are uplifting and make you have a smile on your face. Some great pop anthems with a bit of folk feeling instrumentals. Each track has that feeling of wanting to be heard on the radio. Mixed to adult contemporary perfection, but I found that a lot of tracks lacked dynamics. No huge separation between verse and chorus. Vocal wise, it sounds all in the same pitch and vocal tone throughout most of the album. At times I almost didn't know I was listening to a new track, they just seem to flow into each other. I hear a lot of backing vocals and things that fill out the tracks behind him, but I would love to hear some more definite separation between parts in the songs.

The album is mixed fantastically, all the instruments fit perfectly together, just letting the vocals sit on top taking up the majority of the mix. I think a electronic remix of some of these songs would be very successful in the club scene. The vocals really are the centre point of the album. A lot of the songs remind me of Jason Mraz "I'm Yours" having that bouncy, almost ska like feel.

Be sure to grab the album and see them on tour! For more information go to their website HERE.
Posted by Hammer Records at 5:07 PM