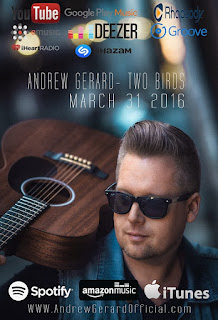 I recently reviewed Andrew Gerard's new single, "Here". He just released his whole album titled "Two Birds" and it takes the ideas of "Here" to a whole new level.

The first track "One Night" is a fantastic adult contemporary song. A groovy acoustic pop beat with Andrews signature vocals. The bass keeps the whole track moving and grooving allowing some very Maroon 5 style "She Will Be Loved" vocals going overtop. I could hear this on any radio station in a heartbeat. It is a fantastic representation of what the album has to offer.

The third track "Just Like Me" Reminds of a beautiful Coldplay song mixed with a little One Direction. Such depth in the vocals and having the call backs in the beginning really add to the change in dynamics. With the drum builds up it just gets your heart swelling towards to driving chorus that makes you sing along even if you don't know the words. This track will put a smile on your face even on the rainiest of days.

Even though everything has been fairly soft so far, "Forever" is the ballad of the album. Its repetitive lyrical title really takes it to your heart. Also being the shortest album on the album it just allows it to quickly pass by with you realizing to lyrical depth to this song. Take a few listens and let this song sink in. Definitely one of my favourite tracks on the album so far.

"Perfect Illusion" take things back up to the groovy upbeat we were familiar with. This sweet love song has some great synth elements as well which fill out the track. The strings do a wonderful job of supporting the vocals while also giving a lot of dynamics to the track when they aren't there. The backing vocals come in perfectly in building the tension in the song. Overall a fantastically written track.

The last track on the album "Forward We Go" could be another great single. A little bit of Oasis seems to flow into this track. I absolutely love the string arrangement in this track. The slow gradual build of the entire track is just masterfully done, each layer adding the perfect amount until the final "Forward We Go" lyric that says goodbye for this album but as it suggests, forward to the next album!

Even though this album just came out, I am dying for a second album already. This is a perfect album for morning coffee or an afternoon walk along the beach. Share it with someone, or hog it all to yourself, but this album needs to be listened to again and again.

Check out the album on Spotify HERE. Follow Andrew Gerard on Facebook HERE.
Posted by Unknown at 7:21 AM