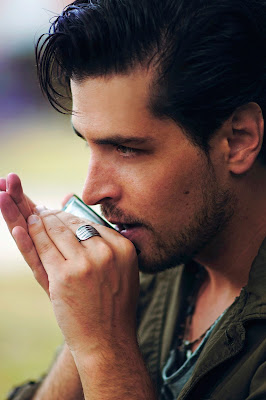 Calgary musician Matt Blais is performing at this year's Canadian Music Week. We had a quick chat with him about his upcoming performance.


Hammer Records: Tell us what you think of when you think Canadian Music?
Matt Blais: When I think of Canadian music, I picture an iceberg. Obviously there are the big acts that all the world knows but there is so much more below the surface - so many great bands that go unnoticed or unrecognized. You really have to do your work in Canada to find the great bands that speak to exactly what you want to hear. I guess that isn't really a bad thing though, it makes it all the more rewarding when you find it.

Hammer Records: How did you get involved in Canadian Music Week?
Matt Blais: I submitted - just like many many other bands. I think I've submitted every year of my career (even when I wasn't ready). I just knew it was the place to be. It's always been a goal to showcase.  Last year we toured out to Toronto even though we weren't selected just to be NEAR the action. It's a great festival even if you don't have a showcase. This year, I was selected and we're showcasing May 5th at The Cadillac Lounge. The stars are starting to align CMW, new recordings and videos, a single to radio. It's gonna be a busy year!

Hammer Records: What do you have planned for Canadian Music Week?
Matt Blais: Obviously I'm excited for the other shows. Awesome acts in awesome venues. I'm gonna bounce around like crazy. "Little You, Little Me", "Ascot Royals", "White Lung" are some that I'm most excited about.  I'm gonna try to meet as many people as I can - there's just so much to do and so little time.
As for making my show special ... It's already special! (Haha, I know what you mean though). Every band has got to "Bring it!" It's roots music at it's core, so it's about honesty and blood letting your emotions on stage. I won't be setting off fireworks or swinging in on a wrecking ball. But we aren't afraid to get sweaty and work our asses off for the audience. That's what has always set us apart. Solid musicianship and rock'n'roll with a message.

Hammer Records: What message do you want to send to Canadians listening to your music?
Matt Blais: I want to thank them firstly. Lovers of art connect on this other level and I'm lucky I get to share in that connection. I try to walk a fine line between substance and having a good time. I hope those listening can think and dance at the same time. If those listening are in Toronto, or plan to be during CMW, then I hope they see my show and as many others as possible.


Matt Blais: It was just announced a song of mine won "The Great American Song Contest" (in the Rock & Alt category.) So we'll be starting to push that song to radio, film and tv etc. That's focus number 1 at this moment.
We are touring out to CMW starting late April. Then across the country again later in the year. I feel most at home on the road, so hopefully we are coming to a city near you! Dates will be posted at: www.mattblaismusic.com
We have some new recordings in the bag. We're just finalizing the plan now as to whether it will be an album or a string of singles. I'm always writing and creating, so I want them out in the world ASAP.
Social Media:
www.mattblaismusic.com@mattblaismusicwww.facebook.com/mattblaismusic
www.youtube.com/mattblaismusic
www.instagram.com/mattblaismusic
Posted by Unknown at 5:04 PM