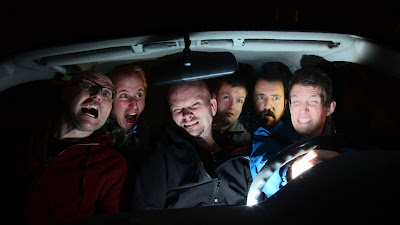 Who doesn't like a good beer. While prepare to enjoy a bunch of great brews! The Vancouver Craft Beer Week is coming up! Lots of events, samples, and lots of music is coming up at multiple locations. 99.3 CFOX is putting on a fantastic contest where you can vote for your favourite band to perform at the VCBW event at the PNE.

We had a quick chat with Garrett and Ry from The Brass Action about the competition.

Hammer Records: Whats your favourite beer?
The Brass Action: Right now we're drinking a lot of Strange Fellows.  They're right by our jam space and have a hell of a selection.  Love that Nocturnum Dark IPA!  Shout out to the staff there, hi Alex!

Hammer Records: What do you want to say to your fans that vote for you?
The Brass Action: THANKS SO MUCH! Hope to see you at VCBW!  VOTE FOR PEDRO!

Hammer Records: Do you have any fan incentives to get fans to vote for you?
The Brass Action: We've been known to partake in bribery... err, I mean merch giveaways in the past.  We should have something on Facebook this week!

Hammer Records: What is your favourite song being played on 99.3 CFOX right now?
The Brass Action: They played Blink 182 - All the Small Things the other day! What was the last Rush song they played? Our drummer loves Rush.  Let's go with Weezer - King of the World, final answer.

Hammer Records: What are your coming up for your band? New songs? Videos? Shows?
The Brass Action: We have 4 new covers coming out, including a tribute to the Railway Club... hopefully this week! A music video for one of our new songs, Good Intentions, Wrong Direction.  We just released our 2nd album No Soundcheck on vinyl!  And hopefully playing VCBW!!

Hammer Records: Where can people find your music? Social Media links?
The Brass Action: We have pretty much everything under the sun...
https://itunes.apple.com/ca/album/no-soundcheck/id1034502219  >>> For musichttps://www.facebook.com/theBrassAction/ >>> For shows/HILARIOUS jokes/cat pictures/etc@thebrassaction on Instagram and Twitter.
Posted by Unknown at 4:36 PM