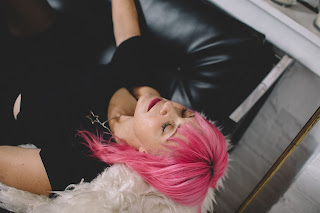 Chicago musician Spaces Of Disappearance is bringing her Dark Electro Pop to Canadian Music Week. We had a brief chat with her about her upcoming performance in Toronto.


Hammer Records: Tell us what you think of when you think Canadian Music?
Spaces Of Disappearance: A lot of great music has come out of Canada in recent years. My solo electronic act is based on the same model as Canadian producer/singer/songwriter Grimes as I write, produce and program my own music as well as sing and perform my live show as a solo act. In the past year I have joined a couple of great Canadian acts on stage: Dear Rouge and Doomsquad. Both are great live electronic acts as I am myself, and I feel my music aligns closely with the electronic live acts coming out of Canada.

Hammer Records: How did you get involved in Canadian Music Week?
Spaces Of Disappearance: I was invited to play this year's official Canadian Music Week and I am looking forward to coming up to Toronto and playing a fantastic set at Nocturne-- and hoping to join some other shows as well!

Hammer Records: What do you have planned for Canadian Music Week?
Spaces Of Disappearance: I am looking forward to catching as many showcases as I can to see the breadth of interesting music showcased at CMW. Also looking forward to trying out all the awesome restaurants in Toronto and staying up to the wee hours after my performances.

Hammer Records: What message do you want to send to Canadians listening to your music?
Spaces Of Disappearance: I think Canadians have a more global perspective in general than many American musicians. I spend part of my year in Barcelona and part in Chicago, so I feel that same vibe: I am a global citizen and I make music for people to enjoy all over the world-- I want to get my music to as many open ears in that world as possible. Looking forward to my Canadian live debut May 6!