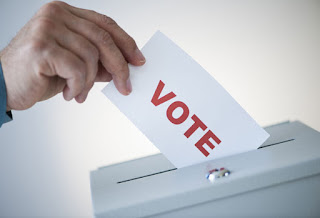 Every year there are tons of competitions going on that require bands to get their fans to vote. Not only does it establish how big a band's fan base is, but also how active they can be. Having a 1,000 people vote once doesn't do as well as having 100 vote once a day for a whole month. Bands will constantly post "Vote for us!" in hopes to remind their fans to spend the time to go to the website and vote, but what is in it for the fans?

From a bands perspective, huge rewards, new shows, potential gear, could be on the line for winning this competition. So all they can do is encourage their friends to vote. Sometimes it gets a little spammy of them asking every day "Hey, have you voted yet?", but its almost all that a band can do. If your a friend or fan of the band then you might spend the time once or even twice to vote for them by doing all the necessary steps. But beyond that, your duty as a fan has been filled, you don't want to be harassed anymore because you voted. You did your part. What entices fans to do anymore beyond that?

Its not like a fan is getting paid to vote, its not like if the band wins that they are going to share any of their newfound loot or glory with the fans. Its just the good feeling of supporting someone for doing something they love. Which is fine, but don't expect your friends to be dashing to their computers every morning to give you another vote. You have to earn that vote. Most bands don't make it about their fans, and without their fans, the band is nothing. Why not release some fun videos to keep reminding people to vote, or if people vote promise them a new song (doesn't have to be studio quality) when the voting period is over. I know there is no way of knowing who voted for you, but involving your fans can entice more people to vote for you.

But as far as those ideas go, it literally is only your bands fan base that is going to vote. Its SO HARD to get random people to vote for you. So by posting on forums or Facebook groups "Vote for me!" is just wasting time. If i don't even know you, or your band, the first impression I get is that you want me to do something for you. Its like going around asking for change around town with a hat. People's first impression is going to be "why should I be giving you money?". With all your best intentions thats not how to introduce someone to your band. You want to first let people become fans of your band and music THEN ask them to go vote. Brings me back to my point, whats in it for me? Getting friends to vote is hard enough, getting strangers to vote is just sometimes impossible.

But rounding back to my point, its only your bands fan base that you are really asking to vote. So if your a new band with 120 Facebook likes (we all know that means maybe 30 of those people actively check your Facebook page on a regular basis), then maybe rethink entering competitions that require extreme amount of voting. Not saying don't entire, but don't over spam your friends in the hope of beating a band with a larger fan base. Spend the time, make your fans, make them your friends, and then you can ask them to vote for you!

I would love to hear all your ideas and comments. Check us out on Facebook HERE and leave us a comment! Or check out website HERE and write in our forum! Or even just comment below!
Posted by Unknown at 7:50 AM